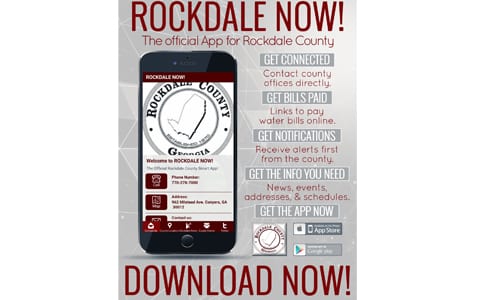 Rockdale County is unveiling a new app called Rockdale NOW! With the Rockdale NOW! App, users will be able to access features including the latest updates, social feeds, county locations, a means to submit code violations, water bill payments and sign up for CodeRED – a notification system for emergencies or weather threats.

“The Rockdale NOW! App is a way to keep the community informed and connected to everything happening in Rockdale, bridging the gap between the citizen and county government,” Board of Commissioners Chairman Oz Nesbitt, Sr. said.

Commissioner Sherri Washington came up with the idea for the app as a way to reach citizens and keep them informed.

“We are excited that with this app, members of our community will have county news and services right at their fingertips,” Washington said.

The app was a project carried out by the Rockdale County MIS and Public Relations departments. This is the first release of an app from the county.

“The Rockdale NOW! App is an exciting means for the citizens of Rockdale County to stay in touch with the people who are here to serve the citizens,” said MIS Director Al Yelverton.  “Look for enhancements to improve citizen interaction in the near future.”

All citizens are encouraged to download the free app from the Apple App Store or Google Play. The app can also be downloaded at http://rockdalenow.mobapp.at.